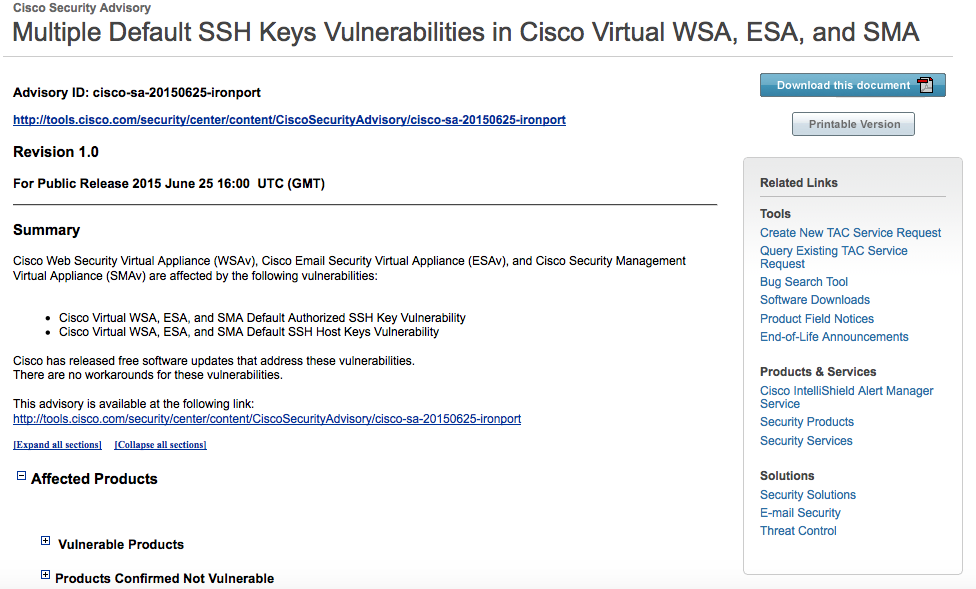 The first flaw, a Cisco Virtual WSA, ESA, and SMA Default Authorized SSH Key Vulnerability, is located in all three affected virtual appliances' remote support functionality, according to a security advisory released by Cisco. A remote hacker can use this vulnerability to connect to an affected system with the privileges of a root user. The second bug is a SSH Host Keys Vulnerability that also affects Cisco Virtual WSA, ESA, and SMA.

Cisco states that there are no workarounds for this issue. However, the technology company has released a patch that deletes the preinstalled SSH keys and provides instructions for how customers can fix the problem. The patch, known as “cisco-sa-20150625-ironport SSH Keys Vulnerability Fix”, must be manually installed from the command line interface. It is not required for physical hardware appliances or for virtual appliance downloads or upgrades after Thursday. In the meantime, Cisco has pulled WSAv, ESAv, and SMAv images while it patches them, but it says that new versions will be posted “in the following days." This news follows a patch issued by the company earlier this spring for an eavesdropping vulnerability on two Cisco IP phones.