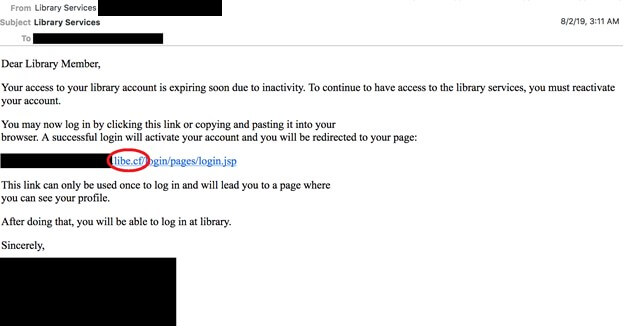 Phishing message containing a link to a spoofed domain circled in red. (Source: Secureworks) Overall, COBALT DICKENS registered over 20 new domains from Freenom, a domain provider which administers ".ml," ".ga" and other top-level domains, to target universities in Australia, the United States, the United Kingdom, Canada, Hong Kong and Switzerland. Attackers took the extra step of protecting these domains using valid digital certificates purchased from Lets Encrypt. Doing so lent an additional sense of legitimacy to their domains, on which they displayed spoofed login pages for university resources which they had previously copied using publicly available tools. The Counter Threat Unit team said the operation's scope has broadened over time. As quoted in its research of the campaign:

As of this publication, CTU researchers observed COBALT DICKENS targeting at least 380 universities in over 30 countries. Many universities have been targeted multiple times. The threat actors have not changed their operations despite law enforcement activity, multiple public disclosures, and takedown activity.

Indeed, the Department of Justice announced that it had charged nine Iranians for having penetrated the computer systems of hundreds of universities in order to steal research and intellectual property. But that crackdown seemingly did not slow the activity of the group, an actor which the CTU team feels is bound to the Iranian government. Given this most recent campaign, universities everywhere should take steps to protect themselves against a phishing attack. This effort should begin with creating a security awareness program designed to educate employees about the most common types of phishing attacks. Towards that end, they can use this resource to get things started.