A ransomware incident at TrialWorks forced at least two law firms to request deadline extensions for some of their court cases. JML Law, APLC requested an extension of 18 days to submit documents pertaining to one of its cases. According to court files, the Woodland Hills-based law firm attributed its request to a "hosting outage" at TrialWorks, its third-party case management software provider. JML Law said all its lawyers were having difficulty in accessing their case files as a result of the incident. A similar situation arose for one of the attorneys working at Whittel & Melton in Spring Hill. A managing partner of the law firm told Miami Herald that the lawyer requested an extension for filing a response in a federal case. They said that the lawyer cited TrialWorks' outage as the reason for their request. As reported by Bleeping Computer, the software provider privately reached out to customers about the incident on October 13. It revealed that its data center had suffered a hosting outage but that it was responding to the issue. The next day, TrialWorks blamed ransomware for the outage in another private email sent to its customers.
Image 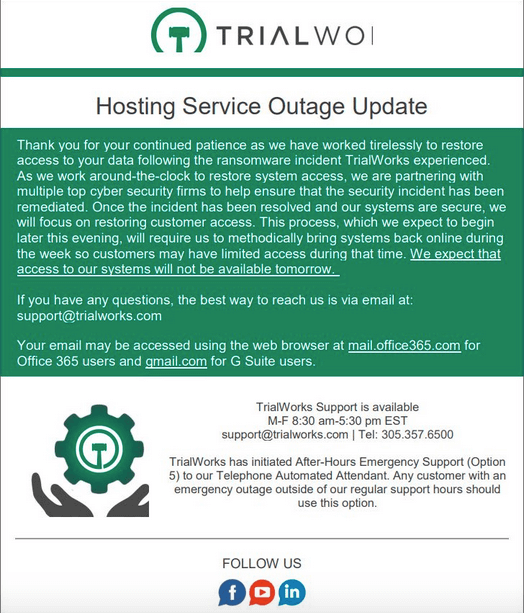 Thank you for your continued patience as we have worked tirelessly to restore access to your data following the ransomware incident TrialWorks experienced. As we work around-the-clock to restore system access, we are partnering with multiple top cyber security firms to help ensure that the security incident has been remediated. Once the incident has been resolved and our systems are secure, we will focus on restoring customer access. This process, which we expect to begin later this evening, will require us to methodically bring systems back online during the week so customers may have limited access during that time. We expect that access to our systems will not be available tomorrow.

TrialWorks revealed that it had disinfected its systems and begun the process of decrypting its data on October 15, which allowed customers to begin regaining access to their files over the next few days. Patrice Gimenez, chief customer advocate for the software provider, told Bleeping Computer that the company had learned its lesson and would begin implementing measures to prevent a ransomware attack in the future. As of this writing, the exact ransomware family that was responsible for this incident remains unknown.