Facebook announced it is notifying more than 800,000 affected users after a bug temporarily reset certain account privacy settings. The social media giant said the bug allowed users who had been previously blocked on both Facebook and Messenger to become unblocked. In a statement, the company said the bug was live for about a week – between May 29 and June 5. Erin Egan, Chief Privacy Officer at Facebook, explained that while someone who was unblocked could not see content shared with friends, they could have seen things posted to a wider audience, such as pictures shared with friends of friends.

"We know that the ability to block someone is important — and we’d like to apologize and explain what happened," said Egan.

When you "block" someone on Facebook they cannot see things you post on your profile, start conversations with you on Messenger or add you as a friend, Egan added. Blocking also automatically unfriends them if you were previously friends. Egan further explained that in the case of this bug, it did not reinstate any connections that had been unfriended. However, someone was unblocked may have been able to contact someone who had previously blocked them through Messenger. According to Facebook, the majority of people impacted (83 percent) only one person they had blocked temporarily unblocked. The company said the issue has since been fixed. Affected users will receive a Facebook notification encouraging them to check their blocking settings.
Image 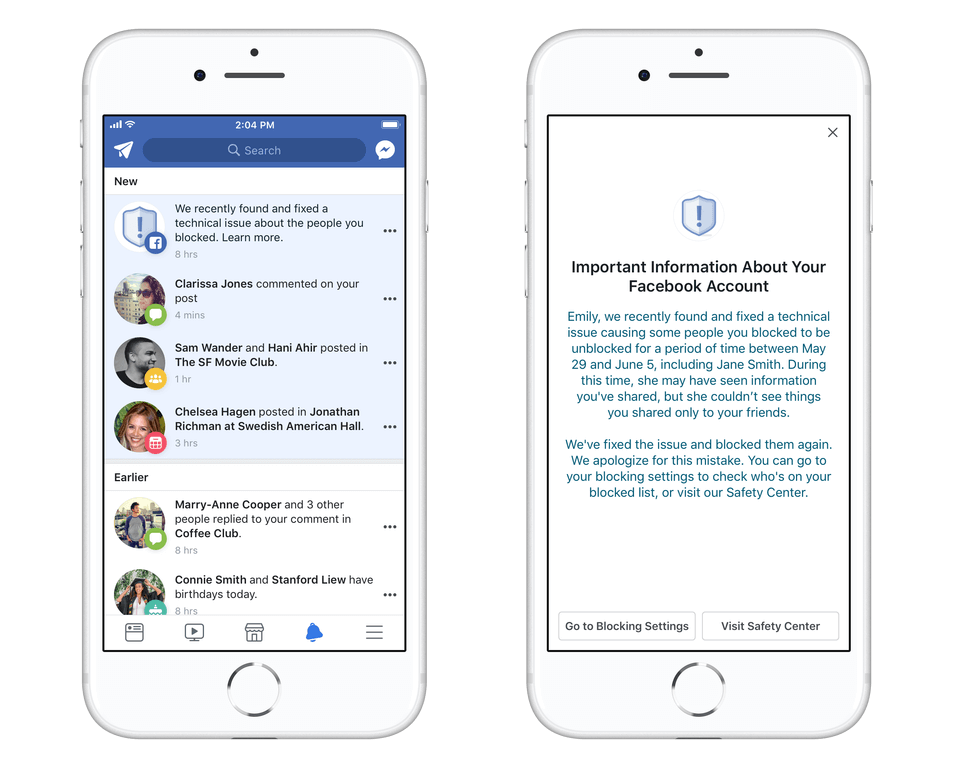 Source: Facebook "There are many reasons why people block another person on Facebook. For example, their relationship may have changed or they may want to take a break from someone posting content they find annoying. Other reasons are more serious like harassment or bullying," said the company. Last month, the Menlo Park-based firm acknowledged another software bug that automatically set some posts to "public," regardless of their privacy settings. The flaw affected upwards of 14 million users over the course of several days in May.