Germany has a message for terrorists who use the Internet to carry out their aims: "Your number is up."
Image 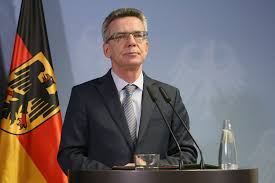 Thomas de Mazière On 11 August, Germany's federal interior minister Thomas de Mazière announced the creation of Zentrale Stelle für Informationstechnik im Sicherheitsbereich (ZITiS), or "Central Office for Information in Security Sphere" in English. The cyber unit, which will go live in 2017 and consist of 400 civil servants, will be responsible for developing "methods, products and strategies to fight criminality and terrorism on the internet." That will include patrolling underground marketplaces like AlphaBay as well as "darknets," or restricted websites typically used for peer-to-peer file-sharing, for illegal weapons purchases and suspicious communications. Like many governments and international law enforcement agencies, the German government doesn't want an ISIS attack or other homegrown terrorist activity on its hands. That's why it feels it's important to create the cyber unit to monitor terrorist cells online. But Germany isn't stopping there. As quoted in a blog post published by the German Government Forum:

"The move is part of a list of measures to boost security in response to recent terror attacks that raised deep concerns about Germany’s vulnerability to Islamist violence."

In addition to creating ZITiS, the German government intends to make it easier and quicker to deport migrants found guilty of a violent crime or, as part of Germany’s Residence Act for foreign nationals, of "endangering public safety." De Maziere said Germany will also seek to strip Germans with dual nationality of their German citizenship if they fight for groups like ISIS abroad, to punish those who engage in "promoting terrorism," and to speak with senior doctors about how they can loosen doctor-patient confidentiality in the event they observe concerning behavior in a patient. I commend Germany for striving to keep its citizens safe. But many of these provisions have "privacy disaster" written all over them. For instance, how does Germany define "promoting terrorism"? Does that specifically relate to spreading radical Islamist propaganda, or does it pertain to someone who might publicly voice their disagreement with the German government's anti-terrorism policy? And will Germany's unit stop at the dark web, or will it monitor other websites like social media where everyday German citizens carry out their digital lives? What do you think about these measures? Let us know in the comments!