A website used by Microsoft to challenge the U.S. federal government's policies on matters of privacy and surveillance has allegedly been hacked. According to ZDNet, Digital Constitution appears to have been modified at 9:15 pm EDT on Wednesday, with casino-related text -- including keywords used to garner greater search engine hits, such as "casino," "blackjack," and "roulette" -- injected at the top of the site.
Image 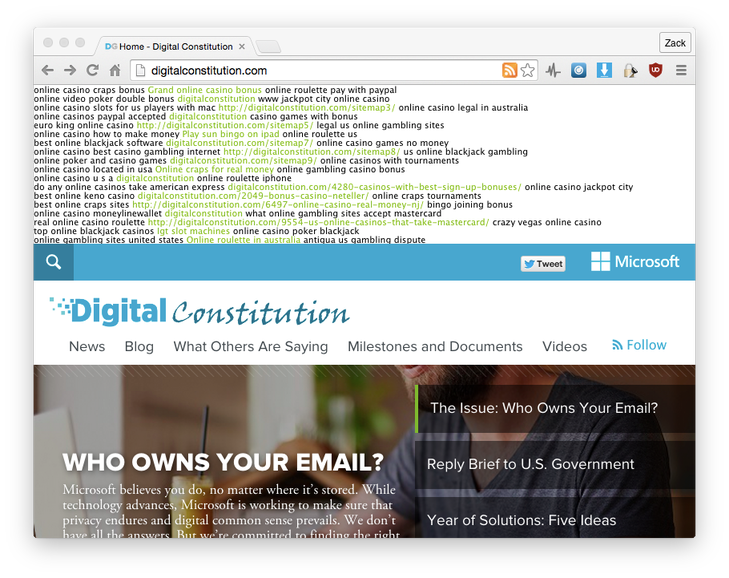 Source: ZDNet ZDNet goes on to report that the attackers, who remain unknown, also created new pages that were injected to show embedded content from other casino-related websites. Meanwhile, the rest of the site's content appeared to be intact.An analysis of the site's code reveals that Digital Constitution was using WordPress 4.0.5 and not WordPress 4.2.2, the latest version. This type of code injection suggests that a scammer and likely not a group of hackers attacked the website simply by exploiting vulnerabilities in its software. Microsoft has since cleaned up the hacked pages, though it is believed that some buried pages remain. It has yet to comment on this incident. Digital Constitution was launched back in 2013 shortly after Edward Snowden released documents revealing the United States government's surveillance activities against ordinary American civilians. Microsoft created the site out of concern for these revelations as well as its inability to speak freely about the Foreign Intelligence Surveillance Act (FISA) at that time.

"The United States has long been admired around the world for its leadership in promoting free speech and open discussion," Digital Constitution's founding document states. "We benefit from living in a country with a Constitution that guarantees the fundamental freedom to engage in free expression unless silence is required by a narrowly tailored, compelling Government interest. We believe there remains a path forward that will share more information with the public while protecting national security. Our hope is that the courts and Congress will ensure that our Constitutional safeguards prevail."

A few months following the launch of Digital Constitution, Microsoft challenged a federal search warrant that sought to compel the tech giant to hand over customer data stored at its Dublin data center.