Yet another scam email campaign is now targeting customers of the Sydney-based energy provider Origin Energy with malware. In this new wave of attacks, customers receive scam emails asking them to view their bills online. Those messages use the energy provider's logos to try to convince a recipient they're legitimate. If the ploy works, the recipient clicks on the malicious "View Bill" link and subsequently suffers a malware infection.
Image 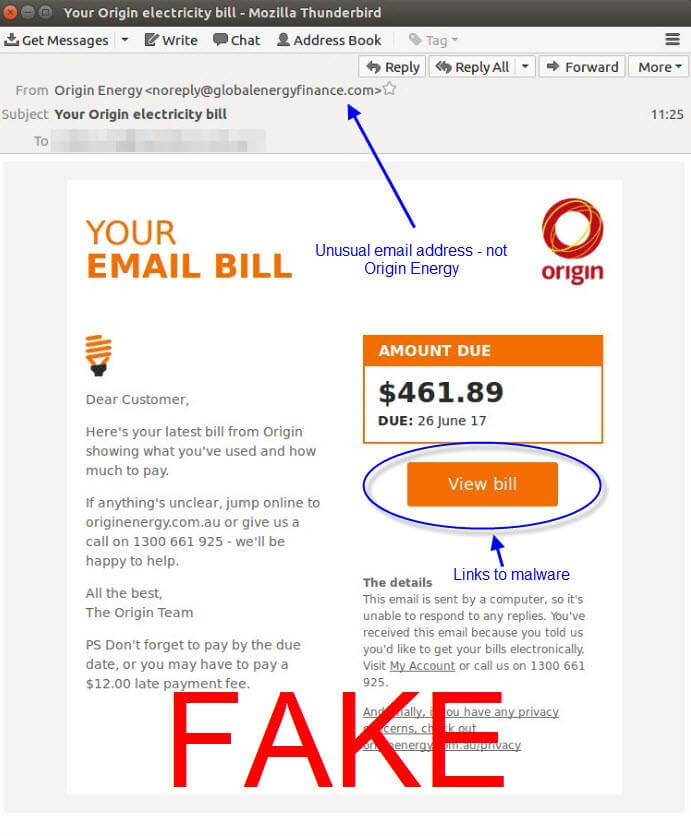 Fake Origin Energy email bill. (Source: NSW Police) This malware campaign isn't perfect, however. The attack emails come up short in that they don't contain the recipient's account number, something which Origin Energy does in its email correspondence with its customers. The messages also originate from either "[email protected][dot]com" or "[email protected][dot]info". Both of those emails have nothing to do with Origin Energy. Finally, while the attackers vary the amount due and the due date in their emails, some of their messages contain a date that's already passed, which all but destroys the urgency of paying in order to avoid a $12 late fee. In pointing out those malicious indicators, the New South Wales Police Force hopes users will delete suspicious emails claiming to originate from Origin Energy and not click on any links contained therein. Origin Energy is also aware of these attacks. https://twitter.com/originenergy/status/886738220993597440 The company is currently uncertain of how many people have fallen victim to the scam, as bad actors sent the attack emails to both Origin and non-Origin customers. But as this the fourth time scammers have targeted its customers since May 2017, the energy provider isn't taking any chances. That's why it's working to raise awareness of scam emails abusing its brand. As a spokesperson for Origin Energy told Yahoo7 News:

"We’re doing what we can to inform our customers and communities about how to spot fake bills, and what to do if they’ve received one. We’re asking customers to consider when they last paid their account and to look closely at the sender, contact details and any links contained in the email."

For additional information on how to spot, protect against, and report a scam, please view this resource published by Origin Energy.