Scammers are now using the threat of channel suspension to coerce YouTube content creators into meeting their demands and sending over money. These digital attackers are specifically targeting YouTube's policy infringement system through which users can report a video that they feel violates the video-sharing website's policies for acceptable content. When it receives such a report, YouTube reviews the content, and if it deems a video has indeed violated its policies, it removes the video and issues a strike against the content creator responsible for uploading it. The platform will go so far as to suspend a creator's channel if that particular user receives three strikes over a period of three months. The problem is that this system generally works in favor of the reporter while presuming the content creator to be innocent until proven guilty. In an instance reported by Bleeping Computer, for instance, someone named VengefulFlame targeted ObbyRaidz and Kenzo. That actor filed two policy violation reports against both of the content creators. After the platform had reviewed the content and issued them two strikes, the digital attacker sent separate ransom notes to ObbyRaidz and Kenzo demanding that they pay up or risk the suspension of their respective channels.
Image 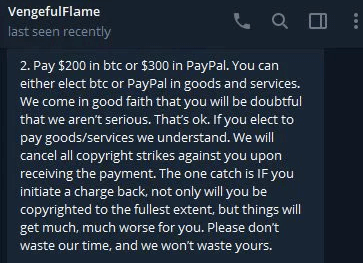 Screenshot of the ransom note received by Kenzo. (Source: Bleeping Computer) ObbyRaidz took to Twitter to see if other YouTubers or his followers had ever experienced something similar. Apparently, VengefulFlame had been watching the content creator from a Twitter account using the same name. The bad actor subsequently informed ObbyRaidz that the deal was off and that they'd now try to get them suspended on Twitter, too.
Image

Screenshot of the follow-up note received by ObbyRaidz. (Source: Bleeping Computer) Fortunately, YouTube eventually removed both of the strikes on the content creators' channels and terminated VengefulFlame's account. It also provided Bleeping Computer with the following statement:

We have zero tolerance for fraudulent actors who try to abuse copyright systems. We responded to reports of these issues and resolved fraudulent strikes well before media ever reached out to us. You can refer to our tweets here and here for a statement on this matter. Creators can always reach out to us on Twitter through @teamyoutube for support.

Hopefully, YouTube will change its copyright systems to take these types of attacks into account going forward. In the meantime, content creators should make sure they've protected themselves from other fraudsters who'd seek to take over their accounts. They can do so by using a strong, unique password and by enabling two-factor authentication (2FA).