In a recent survey by tech giant Mozilla, an overwhelming majority of Internet users admitted they are not informed about how to protect themselves online. The survey polled over 30,000 participants from around the globe – including France, Germany, Australia, Canada, the US and the UK – in an effort to learn more about users’ views on privacy, encryption and security. Overall, more than 90 percent of respondents lack confidence in their ability to stay safe online, with 11.5 percent admitting that they know nothing and need help. Most said they know a little but not enough (74.6 percent), while others assumed they're fine because they believe they’ve never been hacked (5 percent). The remaining 8.9 percent chose the multiple-choice answer, “I’m basically Mr. Robot,” citing being familiar with encryption, two-factor authentication, etc.
Image 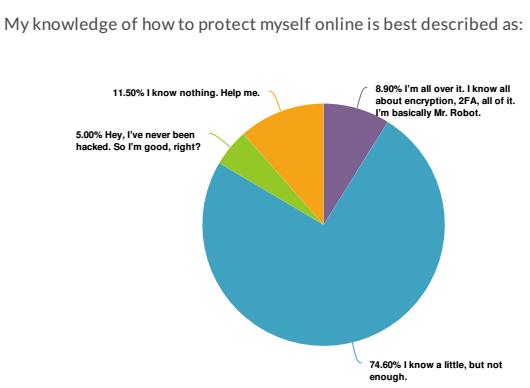 Source: Mozilla The survey also found that many users feel like they have no control over their personal information online. Only 1 in 10 respondents said they feel they “have the power and control over their personal data,” whereas nearly a third said they feel they “have no control at all.” Mozilla also reported that more than half of respondents (56.3 percent) claimed to have changed their behaviors online in the past year because of privacy concerns. Lastly, Internet users cited they were most concerned about the following:
Image 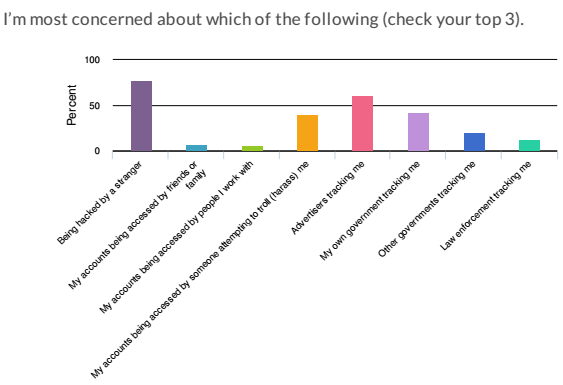 "Personal information has, in many ways, become online currency. And the system is broken because users aren't always aware of how their data is being used or transacted,” said Dixon.

Dixon added that the need for greater transparency is paramount in the industry. “With transparency, users may become more aware of the power that they have over the entire system; users get to decide which products succeed or fail and which models work,” she added.