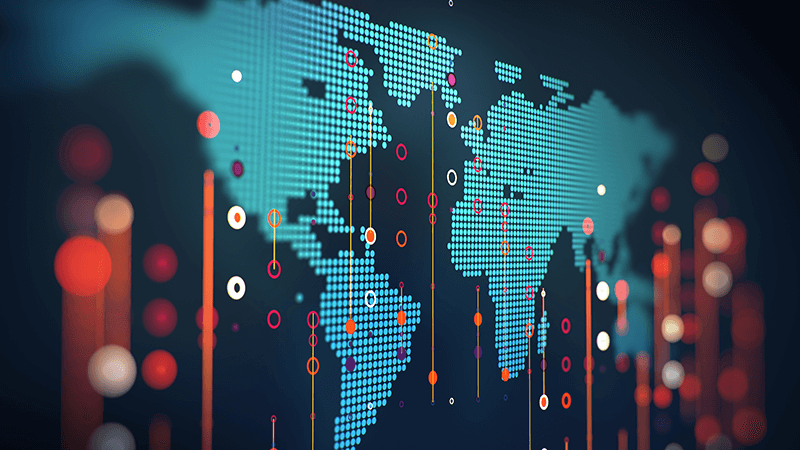 It’s DBIR season! Put down your pens, stop watching “The Last Dance” and get to reading the key findings of the 13th edition of the annual Verizon Data Breach Investigations Report! If “experience is merely the name men gave to their mistakes,” as Oscar Wilde puts it in The Picture of Dorian Gray, then the more we know about the threats we face and how we react to these threats, the better our chances are of keeping our data secure and our company’s name out of the headlines for all the wrong reasons. This year, the report analyzes 32,000 incidents, out of which 3,950 were confirmed data breaches. What's new in this edition is that the findings are broken down into 16 industry verticals and aligned with the MITRE ATT&CK framework and CIS Controls. So without further delay, let us dive into the key report findings featuring commentary by Tim Erlin, VP of Product Management and Strategy at Tripwire.

“We often think of ransomware as a breach, but the DBIR categorizes most ransomware activity as an incident because while you may have lost access to the data, the attacker hasn’t actually stolen it. While that may give you some comfort, it doesn’t mean that a ransomware incident is materially less impactful to the security folks who have to deal with it,” said Erlin, commenting on the report key findings.

The fact that ‘misconfiguration’ errors are in the top five action varieties for breaches is an important acknowledgement that not all incidents are the result of an exploited vulnerability. Misconfigurations actually lead to more breaches than exploited systems, but organizations often don’t put the same effort into assessing them as they do while scanning for vulnerabilities. At a high level, the key things for every organization to worry about are brute force and stolen credentials, and web applications.

According to the report, cloud assets were involved in about 24% of breaches, while on-premises assets accounted for 70% of reported breaches. Cloud breaches involved an email or web application server 73% of the time. Additionally, 77% of those cloud breaches also involved breached credentials. As businesses are adopting hybrid workloads, so too are criminals. These findings are not so much an indictment of cloud security as it is an illustration of the trend of cybercriminals finding the quickest and easiest route to their victims. “Cloud assets are still a minority of targets at 24% compared to on-premises 70%. Why change tactics if they’re working? The cloud has a learning curve for criminals as well as enterprises,” explained Erlin.

IT vs. OT Security

This year, the report began tracking Information Technology (IT) vs Operational Technology (OT) for assets involved in incidents. The findings were not particularly surprising: 96% of breaches involved IT, while 4% involved OT. Although it might not sound like a lot, those breaches involving OT assets all constituted instances in which malicious actors might have attempted to disrupt the reliability and availability of highly critical services, such as the electric grid of water supply that rely on OT equipment. Clearly, there is an adequate cause for concern; relevant industries must take every precaution available to reduce the likelihood of a breach involving their OT assets.

Nearly all (97%) of the incidents reported on mobile devices were errors, meaning a lost device. Despite being frustrating and a problem to tackle, this is not surprising. What is interesting is that the other 3% involved espionage and financial motives. And while the financially motivated incidents range from theft to the use of the device as a vessel for pretexting, the espionage-related cases were exclusively malware-based compromises of mobile devices that were intended to further persistence and facilitate the exfiltration of data by advanced state-affiliated actors. “If you’re worried about mobile devices in your organization, the data says that your biggest concern should be theft or physical loss. Only 3% of incidents on mobile devices were anything other than that basic type of loss,” noted Tim Erlin.

The report findings indicate that hosts susceptible to major new vulnerabilities still also tend to be defenseless against many older vulnerabilities. While this finding seems to indicate that patching is working, it also serves as an indication that asset management is not. Let’s elaborate a bit more on this. The report found that organizations have approximately 43% of their internet-facing IPs in one network. However, the most common number of networks that an organization occupies is five, and half of all organizations are present on seven or more networks. The question is, do you know where these networks are and do you have visibility into the assets of these networks? If you don’t, then you have an asset management problem. Therefore, it might not just be an asset management problem but also a vulnerability management problem on the assets you did not realize were there. Erlin clarified this point for us:

How many steps to a breach?

A very interesting section in the report is the one analyzing the courses of action criminals take to finally breach a company. The incidents and breaches analysis demonstrated that attacks come in numerous forms and sizes, but most of them are short, having a small number of steps. The long ones tend to be hacking and malware breaches, compromising confidentiality and integrity as the attacker systematically works their way through the network and expands their persistence (lateral movement). Attackers prefer short paths and rarely attempt long paths. This means anything you can easily throw in their way to increase the number of actions they have to take is likely to decrease their chance of messing with the data. For example, although two-factor authentication is imperfect, it does help by adding an additional step for the attacker. The difference between two steps, and three or four steps, can be important in your defensive strategy.
Image

Figure 1: Number of steps per incident and per breach. Image courtesy of Verizon. The benefit in knowing the “areas” attackers are more likely to pass through in their journey to a breach gives you the ability to choose where to intercept them. Erlin agreed with that point:

One important lesson to take from the DBIR is that a compromise is often made up of multiple attacks, and so, as a defender, you have multiple opportunities to stop the attacker. The concept of ‘defense in depth’ is applicable here. The data provided about how the multiple steps in a compromise occur is vital. Malware is rarely the first step, and so if you catch malware in your environment, you have to look for what came before that. Hacking is much harder to deal with because it plays a role in the beginning, middle and end stages of a breach.

Figure 2: Steps during a compromise. Image courtesy of Verizon.

As we mentioned in the beginning of this article, this year the DBIR features a breakdown of the findings per 16 industry verticals.

The attacks in this sector were perpetrated by external actors who were financially motivated to obtain easily monetized data (63%), internal financially motivated actors (18%) and internal actors committing errors (9%). Web application attacks that leverage the use of stolen credentials also continued to affect this industry. Breaches caused by internal actors shifted from malicious actions to unintended errors, such as misdelivery, although both were still damaging.

Manufacturing was attacked by external actors (75%) using password dumper malware and stolen credentials to hack into systems and steal data, the report revealed. While the majority of attacks were financially motivated (73%), there was an indication of cyber-espionage attacks in this industry, as well (27%). Internal employees (25%) misusing their access to get away with data also remained a concern for this vertical.

Breaches in this sector consisted of a variety of actions, but social attacks such as phishing and pretexting dominated the incident data. Cyber-espionage-motivated attacks and incidents involving OT assets were also concerns for these industries.

Ransomware was a large problem for this sector, with 61% of malware cases related to it. Ransomware was preferred by financially motivated attackers (75%) utilizing it to target a wide array of government entities. Misdelivery and misconfiguration errors persisted in this sector, too. When sensitive information goes to the wrong recipient and datastores are in the cloud without the necessary security measures in place to protect the data from unauthorized access, these can be serious problems.

Financially motivated organized criminals utilizing attacks against web applications had their sights set on this industry. But employee errors such as standing up large databases without controls were also a recurring problem. These, combined with social engineering in the forms of phishing and pretexting attacks, were responsible for the majority of breaches in this industry. "The industry analysis provided by the DBIR is invaluable," remarked Erlin. "Being able to see which assets, actions, and patterns are most relevant for your industry allows you to take much more decisive action as a defender. For example, Manufacturing should be concerned about crimeware introduced through malware and social engineering more than any other industry. If you’re in healthcare, errors figure much more prominently in your threat model than other industries."

While differences between small and medium-sized businesses (SMBs) and large organizations remain, the movement toward the cloud and its myriad web-based tools, along with the continued rise of social attacks, has narrowed the dividing line between the two. As SMBs have adjusted their business models, criminals have adapted their actions in order to keep in step and select the quickest and easiest path to their victims.
Image 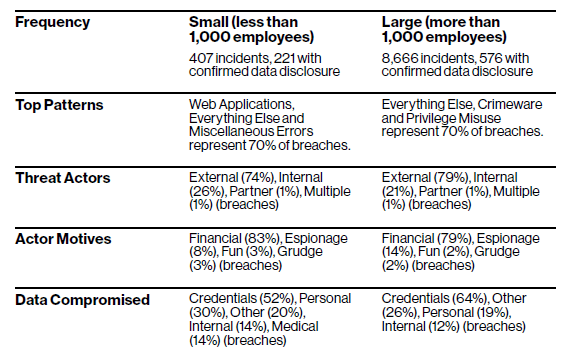 U.S. and Canadian organizations suffered greatly from financially motivated attacks against their web application infrastructure. Hacking via the use of stolen credentials was the threat actor most commonly experienced, with social engineering attacks that encouraged the sharing of those credentials following suit. Employee error was also routinely observed. Although this region accounted for 69% of all incidents and 55% of all breaches in the DBIR dataset, this was due to the strict reporting requirements in Finance, Healthcare and Public Administration. The same trend was witnessed in Europe, where GDPR and NIS force industries to report all incidents and breaches.

Recommendations based on CIS Controls

To align the report findings with the corporate security efforts, the DBIR included a section where the findings were mapped to CIS Controls. And there is a good reason for selecting the CIS Controls because they are a relatively short list of high-priority, highly effective defensive actions that provide a “must-do, do-first” starting point for every enterprise seeking to improve their cyber defense. You may read a quick review of all CIS Controls in this Tripwire post. “The inclusion of the CIS controls, after a hiatus, is a good addition for defenders. CIS is well-respected in the industry, and the controls provide enough information to be actionable but avoid being overwhelming at the same time,” concluded Erlin. Based on the report findings, the following CIS Controls are recommended: Tripwire can help you meet the requirements of CIS Controls and build a highly effective security program. Learn more by downloading this paper.