Extra, Extra, VERT Reads All About It: Cybersecurity News for the Week of August 1, 2022 | Tripwire Skip to main content
Image 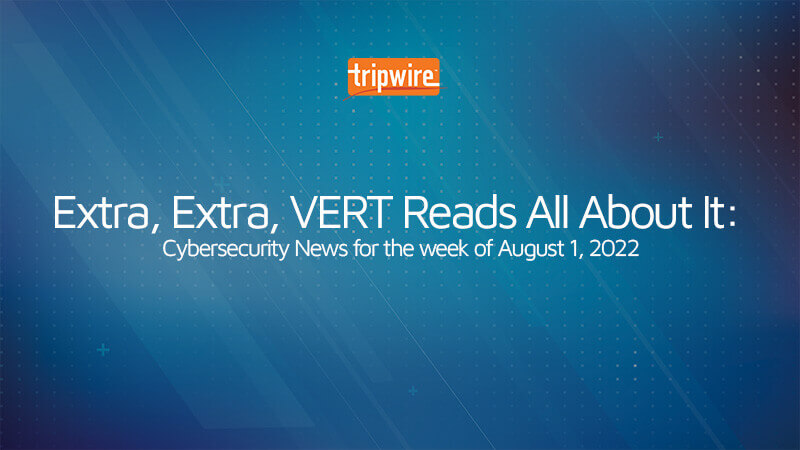 All of us at Tripwire’s Vulnerability Exposure and Research Team (VERT) are constantly looking out for interesting stories and developments in the infosec world. Here’s what cybersecurity news stood out to us during the week of August 1st, 2022. I’ve also included some comments on these stories.

Smart App Control, a Windows 11 security feature that blocks threats at the process level, now blocks several file types that threat actors use to infect targets with malware in phishing attacks, reports Bleeping Computer.  This came on the heels of Microsoft again starting to block macros in Office files downloaded from the web, which forced hackers to resort to different file types when launching an attack.

A high-severity local privilege-escalation (LPE) vulnerability in Kaspersky's VPN Secure Connection for Microsoft Windows has been discovered, which would allow an attacker to gain administrative privileges and take full control over a victim's computer, notes Dark Reading.

Kaspersky's VPN Secure Connect for Microsoft Windows is subject to a local privilege escalation. This vulnerability could allow an attacker to take full control over a victim's system. The vendor has released version 21.7.7.393 to resolve this vulnerability.

Researchers at Trellix have discovered a critical unauthenticated remote code execution (RCE) vulnerability impacting 29 models of the DrayTek Vigor series of business routers, Bleeping Computer announces. The vulnerability is tracked as CVE-2022-32548 and carries a maximum CVSS v3 severity score of 10.0, categorizing it as critical.

DrayTek Vigor is subject to an unauthenticated remote code execution vulnerability. This vulnerability appears to be viable via local and wan connections. Attackers could potentially take complete control of vulnerable devices. The vendor has released patches to resolve this issue.

The US Cybersecurity and Infrastructure Security Agency (CISA) informed organizations on Thursday that a recently patched vulnerability affecting the Zimbra enterprise email solution has been exploited in attacks, notes Security Week.