There is a lot of buzz going around about Reuben Paul, an 8-year-old who at such a young age is already very knowledgeable about information security.

Last month, Reuben delivered a talk at DerbyCon on what kids can teach adults about infosec. He has since given the opening keynote speech at this year’s (ISC)2 Security Congress and the closing keynote address at the 2014 Houston Security Conference.

If that weren’t enough, KEYE CBS News in Austin produced a cover story featuring Reuben and Prudent Games, a company that designs and develops educational apps and games to teach math, science and cybersecurity, for which Reuben serves as CEO.

Recently, I had a chance to sit down with Reuben and his father, Mano Paul, to discuss his accomplishments, his vision and his future.

David Bisson: How did you first learn about infosec? What made you want to get into this field?

Reuben Paul: Well I’ve always loved computers. I’ve liked playing games on computers since around the time I was five but I first got into infosec because of my dad. My dad has taught others about infosec, and one day he started teaching me, too.

DB: Do you find that other kids in your school like infosec?

RP: No, not really. One of my friends said that he’d like to work for me, but no one else besides that. My school doesn’t really deal with infosec. There’s no security club or anything like that.

Sure, we have a computer lab but that’s mainly for teaching typing and basic computer skills. People at my school do know about what I’m doing though. My principal has been going around telling all of the classes, which is cool.

DB: I’m guessing most schools do not have infosec clubs, but you are already aware of this. In your speech at DerbyCon, you mention how you think schools don’t teach infosec because they don’t see its importance or think hackers are automatically bad. Do you think there’s any way we can show schools that infosec does matter? 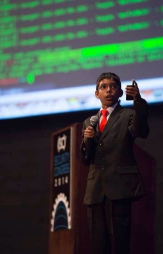 RP: Yes, I do. In fact, I think schools should talk about infosec together with cyberbullying. More and more kids these days are using tech to pick on each other, which can lead to emotional trauma and suicidal thoughts. Schools need to use this as a starting point to teach kids about online safety, as well as security.

DB: How do you see schools going about to do this?

RP: Infosec should be part of schools’ curriculum, especially when it comes to helping kids avoid phishing scams. Maybe it could be a separate unit in the computer labs.

Teachers could start off young kids with the basics by teaching them how to build strong passwords. Meanwhile, the older ones could go deeper into security and learn about how hackers work, social engineering, and how to stay safe on social media. Games would work really well for both groups. It needs to be fun and not be too much pressure.

DB: Those are some excellent recommendations. Ideally, these types of lessons could be reinforced at home. How do you think parents should teach their children about infosec?

RP: Parents need to learn about cybersecurity, so they can teach their kids about threats online. This includes teaching them how to feel safe using computers. For this to work, parents need to have a basic knowledge about things like hacking, and kids need to feel comfortable talking to their parents.

DB: That’s a very good point. Parents and schools do need to take the lead in educating kids about infosec.

Now let’s shift a gears a little. You are the CEO of your own company. What made you decide to form Prudent Games?

RP: It started with a gifted and talented (GT) program at my school – Harmony School of Science, Austin. All of us were assigned to create a game of some kind. Most of my friends made board games, but I decided to design an iPhone app. I came up with the concept for something Math-based and my dad helped me with the code. That’s how Shuriken Math was born.

Well at one point, we took my app to school and showed it to all of my friends. They liked it, and the school administration and my GT teacher and mentor, Mr. McCombs, really liked how my app could help kids learn while having fun. They expressed interest about possibly promoting and marketing the app amongst students within the school system. Some of the kids who tested the app said that they would ask their parents to buy the app for them. So, that’s when my dad and I created Prudent Games.

The motto of our company is “Learn while you play.” In the past year or so, we’ve created two more apps: Cracker Proof, an app that teaches you about strong passwords, and Crack Me If You Can, which is based on infosec and brute force attacks. I learned a lot about infosec creating these apps.

DB: That’s an incredible story! Given everything you’ve already done, what do you think the future has in store for you and Prudent Games?

RP: I’m not exactly sure. I will definitely keep having faith and writing more apps and games. We are planning on creating a portal that can become the one-stop resource to educate kids and adults on cybersecurity issues through videos, games and apps, but we know that we cannot do this on our own. We need support from other companies, schools, and most importantly parents and children. Also, I would like to be a cyber spy at some point and use my skills and experience to help defend children and the United States. 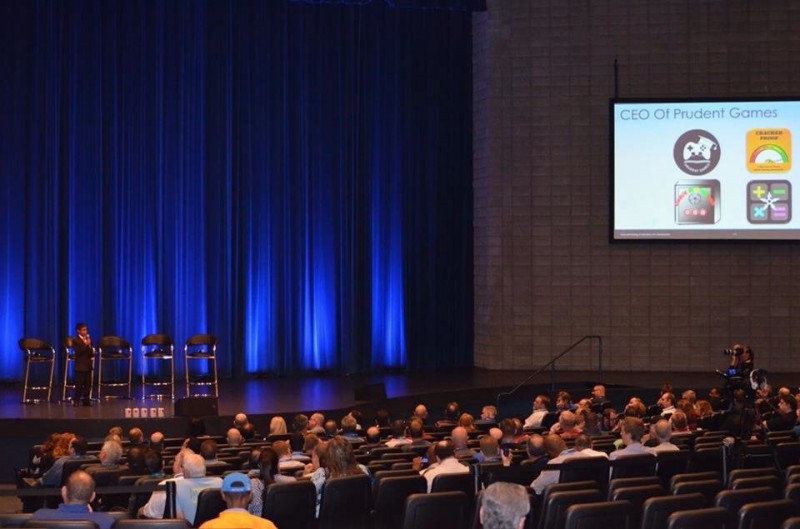 At 8-years-old, Reuben Paul as a CEO has become an ambassador for Cybersecurity awareness, especially among kids.

Reuben has a number of exciting events lined up for the near future. He will be delivering the keynote speech on November 14, 2014, at the Ground Zero Summit—Asia’s foremost information security summit. Also, in May of 2015, he has been invited to be the keynote speaker at the HITB Security Conference in the Netherlands.

Reuben has a bright future ahead of him. It’s stories like his that should give all of us hope for the future of cyber security.

(All photos courtesy of Mano Paul)