Extra, Extra, VERT Reads All About It: Cybersecurity News for the Week of August 29, 2022 | Tripwire Skip to main content
Image 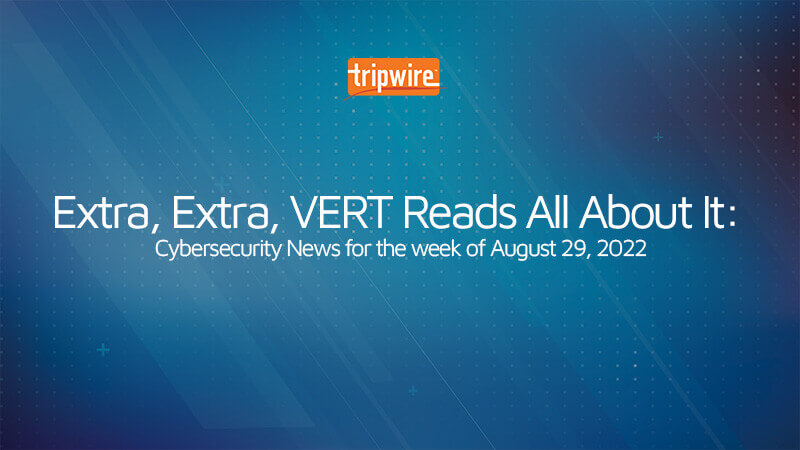 All of us at Tripwire’s Vulnerability Exposure and Research Team (VERT) are constantly looking out for interesting stories and developments in the infosec world. Here’s what cybersecurity news stood out to us during the week of August 29th, 2022. I’ve also included some comments on these stories.

WordPress 6.0.2 Patches Vulnerability That Could Impact Millions of Legacy Sites

The WordPress team this week announced the release of version 6.0.2 of the content management system (CMS), notes Security Week, with patches for three security bugs, including a high-severity SQL injection vulnerability.

“Both iOS and Android apps have exposed AWS credentials. With these credentials an attacker could gain access to databases or other services. It was estimated that 77% of the applications contained AWS tokens that could be used to access private cloud services. The security researchers noted that about 874 applications contained valid credentials that could be used to access database records that potentially contain sensitive personal information.”

Microsoft on Wednesday disclosed details of a now-patched "high severity vulnerability" in the TikTok app for Android that could let attackers take over accounts when victims clicked on a malicious link, explains The Hacker News.

"The TikTok app for Android is subject to an account hijack vulnerability. An attacker could gain access to the user's profile and sensitive information. To exploit this issue an attacker needed to convince a user to open a malicious link. This issue is tracked as CVE-2022-28799. This vulnerability was resolved in version 23.7.3 and later.”

“The XMLRPC API in PowerCMS is subject to a command injection vulnerability. An attacker could execute code upon successful exploitation of this vulnerability. To exploit this issue an attacker needs to specially craft a HTTP POST request to the PowerCMS XMLRPC API. Patches and mitigations have been released.